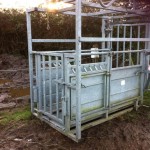 Martin and Jack managed to get it off the trailer without the help of our tractor which decided for the first time ever not to start! (on Clarence’s side maybe?)
It has been parked just outside the field ready to be moved in later in the week.
We fed Clarence right alongside the crush. He didn’t take any notice of it, in fact the llamas showed far more interest all lining up with their heads over the gate.
While Clarence was eating I walked through it to show him it was ok and told him he could have his turn soon. Martin offered to clamp my neck in it to check how it worked but I declined the offer.
On a serious note
the positive was that Clarence didn’t mind standing near it
Today I had a long chat with my vet about the whole situation and my worries about Clarence. In the end it was decided that we would book the two visits 11th Feb and 14th Feb.
We are going to try and get Clarence to walk through the crush by that time and will have sorted out the race.
On the day our vet will bring sedation for Clarence which he will inject from a pole if needed.
I have complete faith in our vets that they will try their best to get the job done
Three days later we will have to go through it all again only this time Clarence will know whats coming and who knows what new trick he will have up his sleeve!
We are overwhelmed by the amount of support we have been offered from farmers, vets and the public. 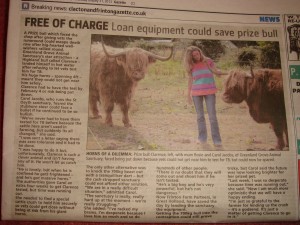 It has been a real support to us knpwing so many people care about Clarence. I will try to respond to all of you. We will keep this website updated with news as it happens
Carol

Our phone and email have been very busy today with messages from wellwishers for Clarence and we have had an offer to give £1000 towards a new special crush for Highland Cattle and an offer to pay for the hire of one and we have had some donations through our website.
The great news is that a farmer quite local to us actually owns three highland cattle and is not only happy to lend us his £3000 special crush, he will also help us on the two days the vet come to first do the injections and then three days later to check his neck to get the result. What a kind man!
The next stage will be building the race which is the run in to the crush usually made out of livestock large hurdles or farm gates or maybe a wall of large straw bales.
Once this is set up we need to try and persuade Clarence to go through it to be fed. I know when we have tried this before he has looked at us as if to say “forget it I am not THAT hungry”
We will use donations for the race and if Clarence doesn’t co operate the tranquiliser
Thank you everyone who has sent best wishes and donations. We have been touched by the support for our shaggy boy!

Clarence made page 3 of the Daily Clacton Gazette today and now his appeal has made the Daily Mail website. Fingers crossed we will get the help we need to get him TB tested.
We will keep you posted!

We were very sad to hear that Joan one of our volunteers passed away at the weekend. Joan had been a volunteer since 2002.
Joan supported the sanctuary in so many ways. Until last year Joan helped one day a week with the smaller animals, strawing up, scrubbing water tanks and loved being around the animals.
Joan also took all the photos for the sponsors, helped at our table tops and volunteered at all our open weekends usually running the tombola in the barn. We will miss her lovely cheese scones she made for the sales.
Joan also helped me with IT at times as computers are not my strong point.
Joan kept the sanctuary close to her heart and we kept her close to ours
We will miss you Joan, We are so lucky you touched our lives
RIP

Community volunteering days during the summer

As part of our aim to give animal lovers a chance to get involved with the sanctuary “hands on” we aim to hold a number of community volunteer days as soon as the weather improves. 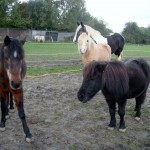 They have been a lot of fun in the past where we have group painting of the buildings, horse grooming, rabbit care & field maintenance. 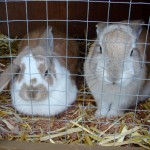 and all with the watchful eye of the animals. 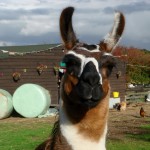 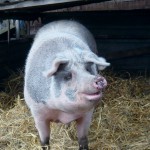 Waitrose makes us one of their good causes for the month!

Brilliant news for us, the more tokens we get the more of the share of the £1000 we will receive. 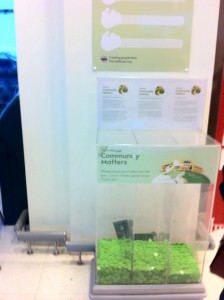